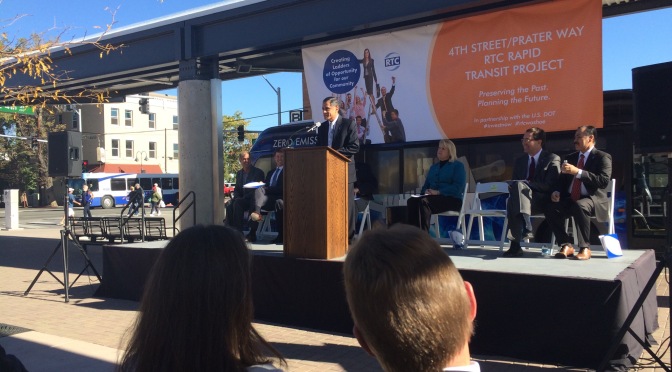 U.S. DOT in a local collaboration that seeks to enhance 4th St and Prater Way. 60 million dollars to bring enhanced walkability and ADA accessibility to streets that desperately need them. 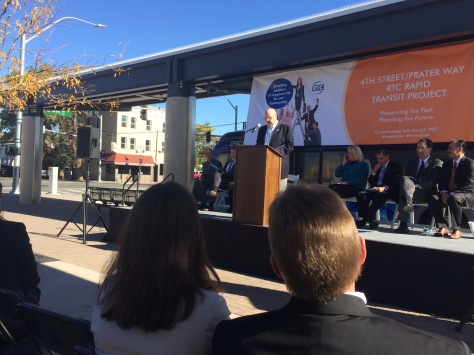 Buses that run through a city can benefit everyone.  Not only is the bus system beneficial for those who don’t have car, but also for those who are new to the city, for those who don’t want to deal with parking at a large event, and for those with a disability.  However, all of these people may not know exactly where their stop is.  Someone who is new to the city, or just visiting, won’t always know what the landmarks around their stop are or even what the street names are.  Someone who parked a distance from the event they’re going to may not know exactly where the stop is, and someone with a disability may not need a  trigger to help them orient where they are.

There is a way that all passengers can tell when their stop is coming up soon.  Some buses and train systems announce every stop when approaching and then once they are at the stop.  According to ADA, there are requirements for bus stop announcements.  The ADA says, “on fixed route systems, the entity [bus system] shall announce stops as follows: The entity shall announce at least transfer points with other fixed routes, other major intersections and destination points, and intervals along a route sufficient to permit individuals with visual disabilities to be oriented to their location. Also, the entity shall announce any stop on request of an individual with a disability.”While this is only required if a person with a disability is on the bus, it would help others as well.  Not every person‘s disability is noticeable so there is no way that a bus driver would be able to tell which person on the bus has a disability and which person doesn’t.

While bus drivers want to help their passengers know where they are going, there are a lot of reasons why announcing the stops are troublesome for bus drivers. They could say that it gets too hectic and that they need to focus on the road, they could say that they aren’t trained to do it, or they could say people can already tell where their stop is.  They can also say that the passengers won’t be able to hear what they are saying when the bus is crowded or when they are in a busy section of town.

To help passengers, and allow bus drivers to focus on driving, there are companies that make automated systems.  Clever Devices, a company based out of New York, has a bus stop announcement system that can be installed in buses.  The “Automatic Voice Annunciation (AVA) system automates on-board passenger announcements, which not only keeps your passengers up to date automatically, but also helps create more accessible buses for visually impaired and hearing challenged riders. [There are] automated voice announcements alerting passengers to upcoming stops are [and these announcements are] coordinated with LED signage on board the bus to help all riders travel with more convenience and independence. The system is fully automated so that bus operators are free to concentrate on driving and other tasks requiring their attention.” This system complies with ADA requirements, has volume control, and allows riders to request a stop.  Even if there is someone on the bus that does not have a disability, this system can help them so that they know exactly where they are and when they need to get off.  It is extremely helpful for someone with a disability because it gives them the chance to read and hear where they are and where they will be going next.

This type of system is already integrated into buses and trains in Canada and buses in London.  It is also integrated into the bus system in Milwaukee, Wisconsin, and Denver, Colorado and the subway system throughout New York.

This system, or any system like this, can make riders’ trip, no matter what their reason for being on the bus, easier.  With the announcement system, the LED sign, and the option to request a stop, every rider has the opportunity to get where they need to be when they need to be there without worrying.

All Disabilities and Accessabilities

Nevada Center for Excellence in Disabilities